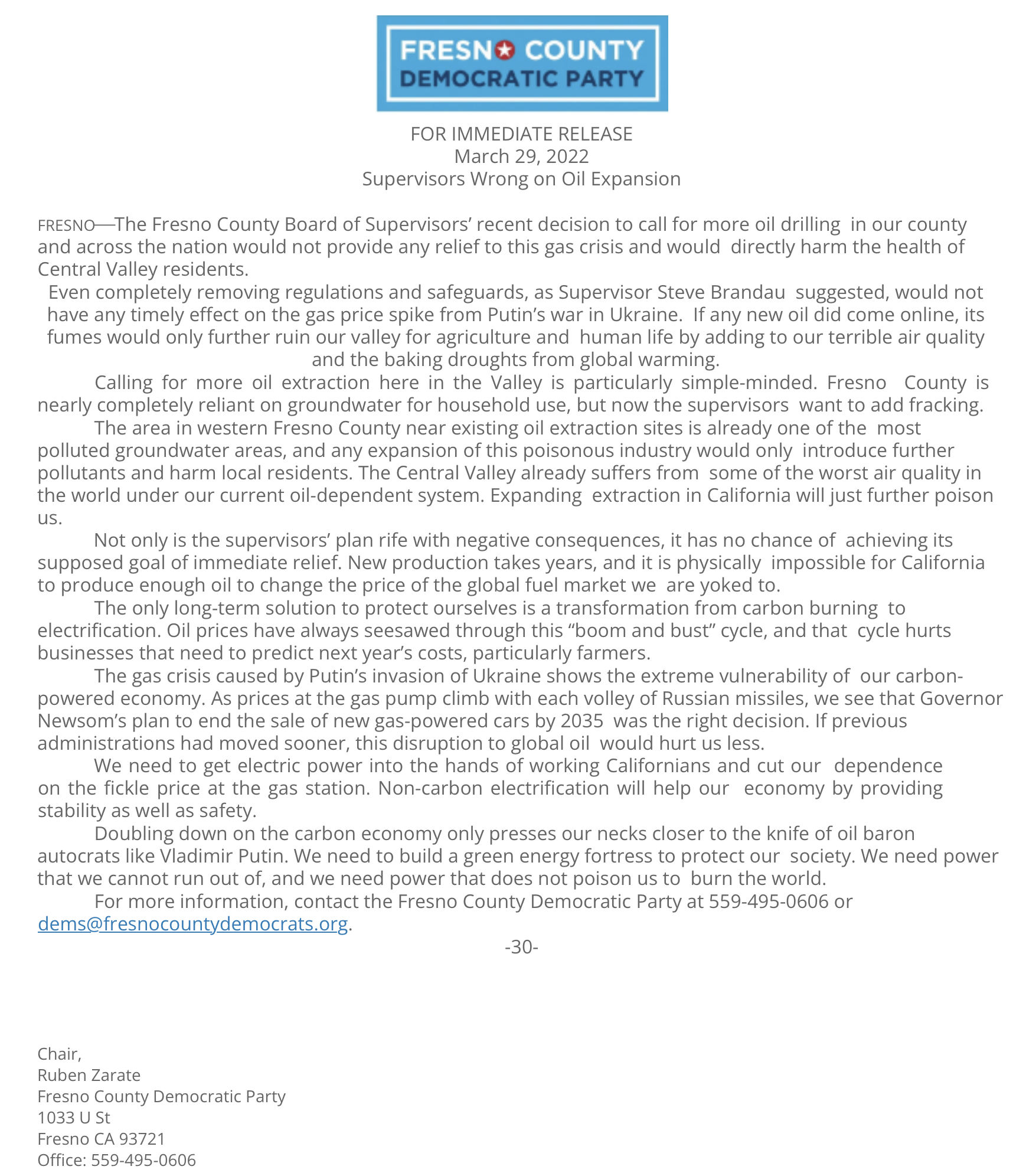 FRESNOThe Fresno County Board of Supervisors’ recent decision to call for more oil drilling  in our county and across the nation would not provide any relief to this gas crisis and would  directly harm the health of Central Valley residents.

Even completely removing regulations and safeguards, as Supervisor Steve Brandau  suggested, would not have any timely effect on the gas price spike from Putin’s war in Ukraine.  If any new oil did come online, its fumes would only further ruin our valley for agriculture and  human life by adding to our terrible air quality and the baking droughts from global warming.
Calling for more oil extraction here in the Valley is particularly simple-minded. Fresno  County is nearly completely reliant on groundwater for household use, but now the supervisors  want to add fracking.
The area in western Fresno County near existing oil extraction sites is already one of the  most polluted groundwater areas, and any expansion of this poisonous industry would only  introduce further pollutants and harm local residents. The Central Valley already suffers from  some of the worst air quality in the world under our current oil-dependent system. Expanding  extraction in California will just further poison us.
Not only is the supervisors’ plan rife with negative consequences, it has no chance of  achieving its supposed goal of immediate relief. New production takes years, and it is physically  impossible for California to produce enough oil to change the price of the global fuel market we  are yoked to.
The only long-term solution to protect ourselves is a transformation from carbon burning  to electrification. Oil prices have always seesawed through this “boom and bust” cycle, and that  cycle hurts businesses that need to predict next year’s costs, particularly farmers.
The gas crisis caused by Putin’s invasion of Ukraine shows the extreme vulnerability of  our carbon-powered economy. As prices at the gas pump climb with each volley of Russian missiles, we see that Governor Newsom’s plan to end the sale of new gas-powered cars by 2035  was the right decision. If previous administrations had moved sooner, this disruption to global oil  would hurt us less.
We need to get electric power into the hands of working Californians and cut our  dependence on the fickle price at the gas station. Non-carbon electrification will help our  economy by providing stability as well as safety.
Doubling down on the carbon economy only presses our necks closer to the knife of oil baron autocrats like Vladimir Putin. We need to build a green energy fortress to protect our  society. We need power that we cannot run out of, and we need power that does not poison us to  burn the world.
For more information, contact the Fresno County Democratic Party at 559-495-0606 or  dems@fresnocountydemocrats.org.
-30-
Chair,
Ruben Zarate
Fresno County Democratic Party
1033 U St
Fresno CA 93721
Office: 559-495-0606

No comments to show.

Paid for by the Fresno County Democratic Central Committee. Not authorized by any canididate or committtee.
FEC ID: #C00518605
FPPC ID: #743910